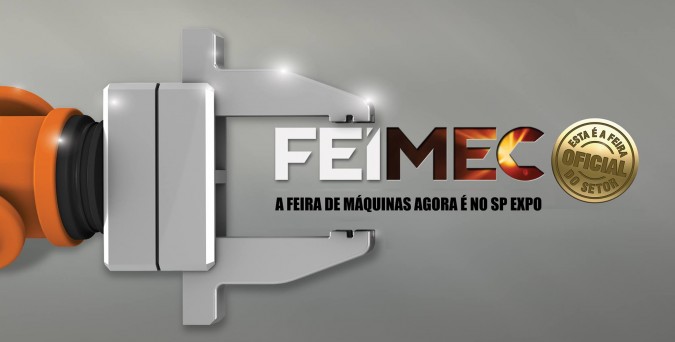 First of all, Brazil needs to invest heavily in modernization of the own industrial technology, to switch from the second to the third technological evolution period, to replace traditional systems with numerically controlled machine tools, used independently until now.
– Alfredo Ferrari, mechanical engineer and vice-president of ABIMAQ –

With a gross domestic product around 2.3 trillion, Brazil is the seventh world economy, and it is the fifth most populated country. Despite an understandable stalemate in its economic development after the boom in the first decade of the new century, it represents a huge market capable of attracting investors from all over the world.

The FEIMEC International Machinery and Equipment Exhibition, which will take place in São Paulo on May 3-7 2016, is a unique opportunity at a crucial time for the Brazilian growth prospects. All the major manufacturers will attend it to bring together supply and demand, to show new automation technologies and to promote that decisive shift in the production system towards a further technological evolution of industrial production systems. An evolution, which could give new impetus to a country — and to a whole continent — with an enormous economic potential still to be developed.

Then, if the Brazilian future passes also through FEIMEC, Simpro, which has a special relationship with future and with Brazil, cannot miss it. To show once again its capacity to innovate, the infinite care for the customer’s productive needs and its usual reliability.

See you at stand C158, where you can examine our products and our working methods, as the result of a thirty-year experience in manufacturing production systems for the automotive and railway industry.

This website uses cookies to improve your experience while you navigate through the website. Out of these, the cookies that are categorized as necessary are stored on your browser as they are essential for the working of basic functionalities of the website. We also use third-party cookies that help us analyze and understand how you use this website. These cookies will be stored in your browser only with your consent. You also have the option to opt-out of these cookies. But opting out of some of these cookies may affect your browsing experience.
Necessary Always Enabled

Any cookies that may not be particularly necessary for the website to function and is used specifically to collect user personal data via analytics, ads, other embedded contents are termed as non-necessary cookies. It is mandatory to procure user consent prior to running these cookies on your website.